A fun Halloween non-murder mystery party for 8-12 guests, ages 13+ due to difficulty. 45 unique character roles with all three expansion packs and main game. Expansion packs will expand toaccommodate 225 guests (see outline on how to host a large party below).

Select the party ready option above, and our staff will fold and slip the clue cards for rounds one, two, and three into the envelopes to prevent you from seeing spoilers on the round cards.  If you do not select this option, you will have some assembly required with your kit.

This is the non-murder version of the Murder at Skull Manor game. 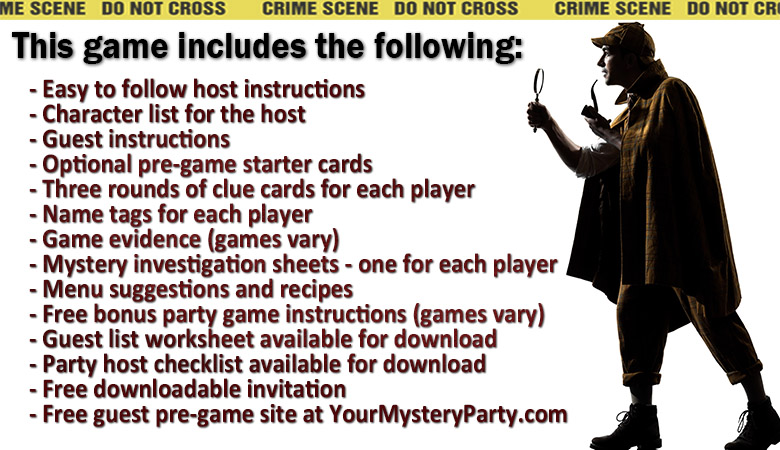 It is time again for the annual Pumpkin Palooza Costume Party! Skull Manor is an old estate in the heart of Spider City known for its captivating architecture, mysterious ambiance and unspeakable history. The townspeople have been scurrying about the streets to get ready for the big night of great food, inspiring conversations and, of course, outrageous gossip. This has been a daunting year of dissension and discord among many of the residents of Spider City. Rumors of blackmail, thievery, and outrageous controversies have been circulating throughout the town’s grapevines. We all hope everybody can put aside their differences for a night of fun. If not, there may be misfortune on the horizon. This is where your story begins.

HOW TO HOST A LARGE PARTY:

TOTAL PLAYERS: 45 UNIQUE CHARACTERS AND 180 DUPLICATE TEAM MEMBERS = 225 This game will accommodate 45 unique players by using the main game and all three expansion packs. You can also expand the game to over 225 players by adding duplicate players to the teams as described below (it does require you purchase all expansion packs, as well).